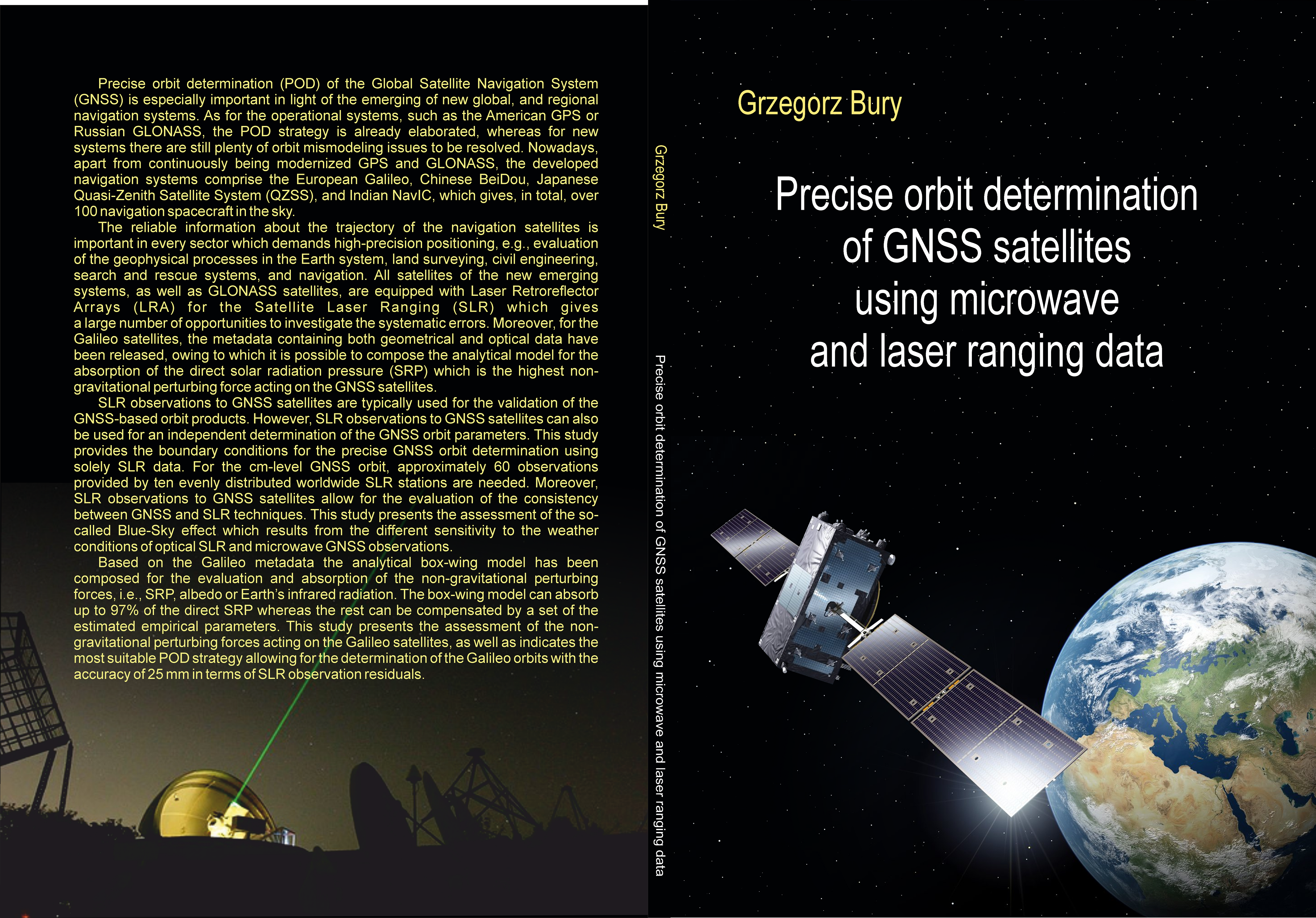 Precise orbit determination (POD) of the Global Satellite Navigation System (GNSS)
is especially important in light of the emerging of new global, and regional navigation
systems. As for the operational systems such as America GPS or Russian
GLONASS, the POD strategy is already elaborated, whereas for new systems there
are still plenty of orbit mismodeling issues to be solved. Nowadays, apart from
continuously being modernized GPS and GLONASS, the developed navigation system
comprise the European Galileo, Chinese BeiDou, Japanese Quasi-Zenith Satellite
System (QZSS), and Indian NavIC, which gives, in total, over 100 navigation
spacecraft in the sky.

The reliable information about the trajectory of the navigation satellites is important
in every sector which demands high-precision positioning, e.g., evaluation of the
geophysical process in the Earth system, land surveying, civil engineering, search
and rescue systems, and navigation. All satellites of the new emerging systems, as
well as GLONASS satellites, are equipped with Laser Retroreflector Arrays (LRA)
for the Satellite Laser Ranging (SLR) which gives a large number of opportunities to
investigate the systematic errors. Moreover, for the Galileo satellites, the metadata
containing both geometrical and optical data have been released, owing to which
it is possible to compose the analytical model for the absorption of the direct solar
radiation pressure (SRP) which is the highest non-gravitational perturbing force.

SLR observations to GNSS satellites are typically used for the validation of the GNSS-based
orbit products. However, SLR observations to GNSS satellites can be also
used for an independent determination of the GNSS orbit parameters. This provides
the boundary conditions for the precise GNSS orbit determination using solely SLR
data. For the cm-level GNSS orbit, approximately 60 observations provided by ten
evenly located SLR stations are needed. Moreover, SLR observations to GNSS satellites
allow for the evaluation of the consistency between GNSS and SLR techniques.
This study, presents the assessment of the so-called Blue-sky effect which results
from the different wavelengths in which the two techniques operate.
Based on the Galileo metadata the analytical box-wing model has been composed
for the evaluation and absorption of the non-gravitational perturbing forces, i.e.,
SRP, albedo or Earth’s infrared radiation. The box-wing model can absorb up to
97% of the direct SRP whereas the rest can be compensated by a set of the estimated
empirical parameters. This study presents the assessment of the non-gravitational
perturbing forces acting on the Galileo satellite, as well as indicates the most suitable
POD strategy allowing for the determination of the Galileo orbits with the 23 mm
accuracy.

Grzegorz Bury graduated from UPWr in 2016 with a Master's Degree in Geodesy and Cartography. He is a Ph.D. candidate focusing on precise orbit determination of multi-GNSS satellites using microwave and SLR observations, as well as the improvement of the consistency between SLR and GNSS solutions.